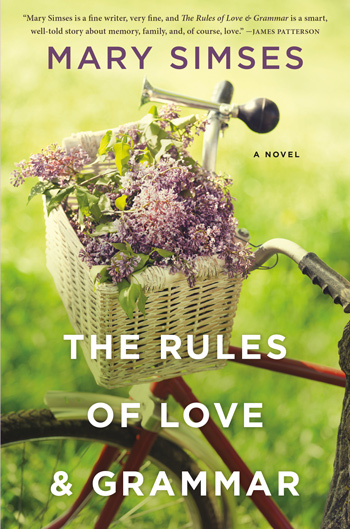 The Rules of Love & Grammar

Grace Hammond is a young woman with a bone to pick about spelling mistakes, punctuation, and sentence structure. A wordsmith by trade, Grace can’t let even the most innocent grammar mistakes slip by. She marks up menus in restaurants and cringes when she sees fliers with incorrect punctuation. Grace’s life is in need of correcting, too. Laid off from her writing job and newly single, she hits Pause and returns to her childhood home in Connecticut.

Back home, Grace sets out to confront the mistakes she’s made in life (while pointing out the town’s grammatical ones, of course) and come to terms, finally, with her sister’s death. Along the way, she falls into a love triangle with her high school sweetheart, now a famous film director; his leading man, a movie star with looks so perfect that women swoon upon meeting him; and the proprietor of a local bike shop with a meaningful connection to Grace’s past. Torn between the allure of a glamorous life and the comfort of the familiar, Grace must decide what truly matters, and whether it just might be time for her to set aside the rule book, open her heart, and take a chance on the unknown.

“Mary Simses is a fine writer, very fine, and The Rules of Love & Grammar is a smart, well-told story about memory, family, and of course, love.”
–James Patterson

“Grace Hammond is happiest holding a red pen and making corrections to the many grammatical errors in the world. If only she could do the same in her own life. Thirty-something copy editor Grace is facing the romantic comedy setup trifecta of misfortune: she lost her job, her boyfriend dumped her, and her roof is leaking. While her Manhattan apartment is undergoing repairs, she spends two weeks at her childhood home in Connecticut as her parents plan a big birthday celebration for dad. By happy coincidence, Grace’s high school sweetheart, the one who got away, has also returned home for a few weeks. Fate has treated him more kindly, though, as he’s in town directing a major feature film. In her effort to win back her lost love, Grace attempts a series of edits in her own life, failing both awkwardly and charmingly. Simses (The Irresistible Blueberry Bakeshop & Café, 2013) gives readers a protagonist they can simultaneously root for and cringe over as they read about Grace’s antics. Most squirmworthy is a scene in which Grace bumbles through a TV news interview about the bike shop where she’s temporarily employed, clumsily suggesting it would be lost without her. Despite her many social gaffes, Grace has three eligible bachelors pursuing her, and it’s no surprise which one she ultimately chooses. Despite the lack of suspense, the story has real heart and emotional grit, primarily because of the rich and layered subplot about Grace’s sister’s fatal auto accident as a teen. After 17 years, Grace still blames herself and would love nothing more than a rewrite of that fateful night. Alas, there is no red pen for her greatest mistake. In this sweet and heartfelt story, Simses provides a valuable lesson in the futility of striving for an error-free book of life. A lovely read.”
—Kirkus Reviews

“Grace Hammond is absolutely positive that bad luck comes in threes. She’s out of a job, her boyfriend just dumped her for a cute paralegal, and there’s a major water leak in her Manhattan apartment building. Grace heads back to her hometown of Dorset, Connecticut, to regroup. Her parents and best friend, Cluny, are thrilled to see her, but Grace just wants to lay low until her apartment is repaired. And lay low she does—until she hears that an old flame is directing a new movie currently filming in Dorset. Completely unsure of her future, Grace wonders if her past holds all the answers. The type-A heroine floundering in her hometown is a familiar trope, but Simses delivers a charming and unpredictable spin on the concept. Grace’s journey of personal growth skirts the line between relatable and aspirational, as Simses contrasts the security of small-town life with Grace’s dreams of Hollywood grandeur. Fans of Mary Kay Andrews, Elin Hilderbrand, and Jennifer Close will adore the picturesque setting, genuine characters, and rom-com feel.”
—Booklist

“Simses (who also wrote The Irresistible Blueberry Bakeshop & Cafe) creates a barrel-full of great characters in this book, as well as the picture-book scenery they live in. Grace is something of a Bridget Jones—both endearingly human and fallible, but also heartwarmingly honest and open—with sometimes clumsy, though always well-meant adventures.”
—Barnes & Noble